Home >> Other Teapots >> Copies and Forgeries

Teapots in this section do not have the Registered Number or 1999 mark on underside. 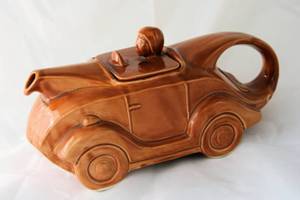 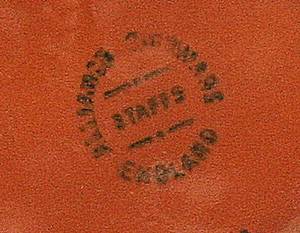 The car is brown glazed and has a circular mark on the underside Alliance Giftware/Staffs/England.  I have been unable to trace the company and it is possible that this is a post 2000 production.  There are no strainers in these pots.

OKT42 teapots made by the following manufacturers

I was very surprised to find an OKT42 teapot copy from this well established Potteries company. 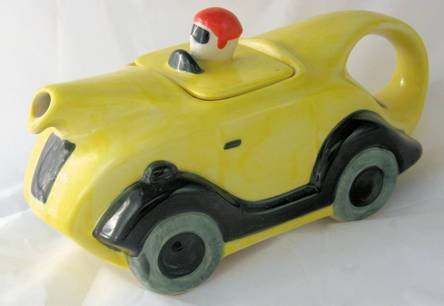 This must have been produced during the competition with Sadlers as Crown Devon went out of business in 1982, eight years before the demise of Sadlers.  Although the Crown Devon teapot does not have a car registration it is very similar is shape and detail to the Sadler output. 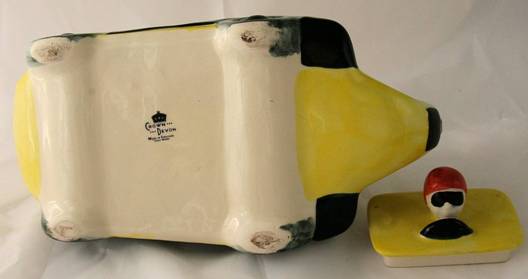 The Crown Devon mark is typical of the period and was used from around 1930 to 1965 according to other authors.  There are no strainers inside these teapots. On balance I think this teapot (similar to the Carlton one) has been manufactured recently by someone wanting to create something different.  (A forgery?)

This teapot to my knowledge is the only OKT42 in current production and is made by the Fairmont and Main company priced at £29.99.  https://fairmont.co.uk/shop/gifts/novelty/brooklands-flyer-car-teapot

They call the teapot the Brooklands Flyer and I believe that it is only available in white with black detailing. 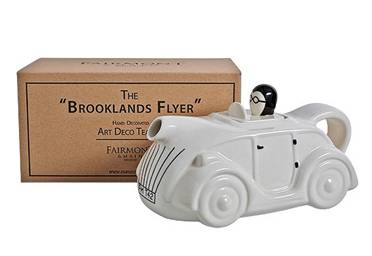 Thanks to Paul Clark and Brian Swann who have shown me examples of this Portuguese pottery output. This company was founded by Manuel Joaquim Alfonzo in 1856 specialising in utilitarian wares. James Gilman took over the company in 1909, initially a book keeper but became General Manger until his death in 1921 when his son 'Raul Gilman' took over in partnership with another British national Herbert Gilbert. The pottery went bankrupt in 1995. Here are images of two OKT42 type teapots. Date of manufacture is unknown but is likely to be pre-war. The white example registration S25665 has a backstamp GILMAN & CTA/ SACAVEM/ PORTUGAL. The green example has no registration and a different indented manufacturers mark which is very difficult to read. However SACAVEM/ Portugal can be discerned. 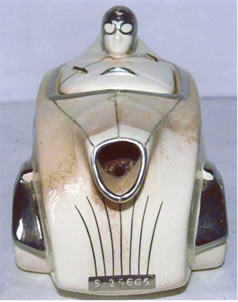 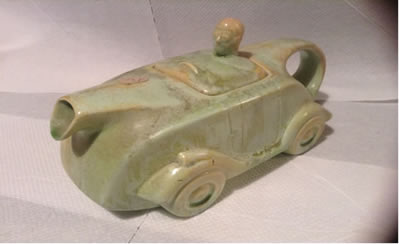 Similar circular mark on underside to the Alliance  Giftware Staffs OKT42.  Must be some connection between the two companies – perhaps somebody could advise me as I cannot find any history?  I believe that these Kenall teapots are slightly larger than the standard and were produced in the 1990’s.  I do not have an example in my collection so unable to give measurements.

I believe Kenall produced many varieties and colours of OKT42 type teapots and possibly a distinguishing feature is the prominence and shape of the ‘wrap-round’ goggles in addition to the rectangular shape of the lid.  Here are a blue and white OKT42, White and gold T42 and a black and white 1932 registration. 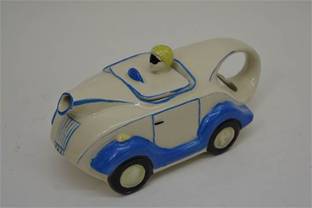 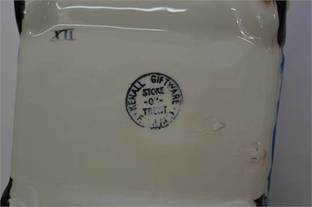 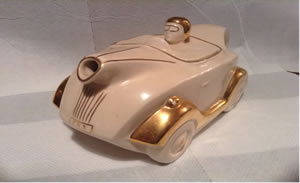 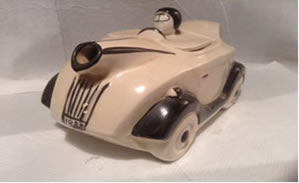 This Japanese company has produced some good copies mainly for the USA market but have also been sold in the UK.  They use the registration OKT42. 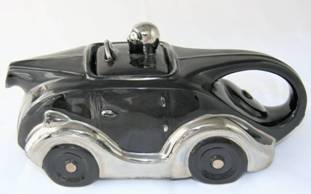 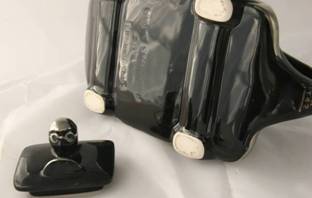 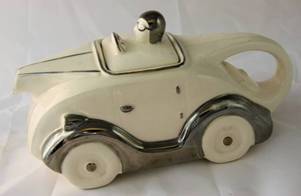 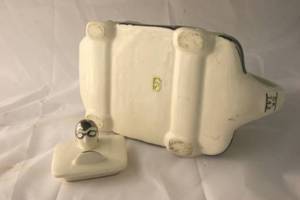 Both pots have stamped SARSAPARILLA/W.N.Y..N.J/H650 © 1985 JAPAN under the glaze.  The white teapot also has a small triangular stick on label reading SARSAPARILLA/DECO DESIGNS/W.N.Y..N.J/©1984/JAPAN.  It is interesting that the label says copyright 1984 whilst the underglaze stamp says 1985!  There is often a triangular card label attached to the teapot. There is a small 4 hole strainer inside the teapot.  These teapots are unusual in that the spout extends in front of the car.

The Vandor company has made some interesting variations of the standard driver with Betty Boop in control.  Also another scarcer teapot where she has a dog as a passenger. 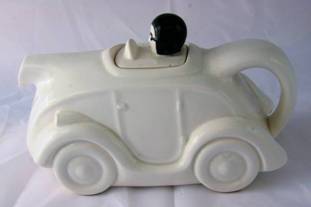 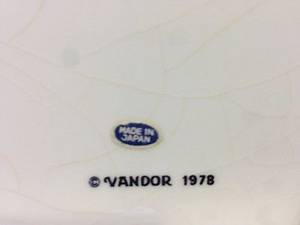 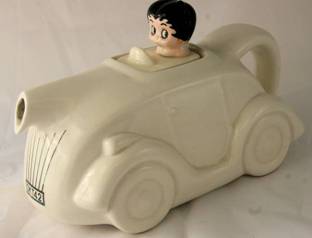 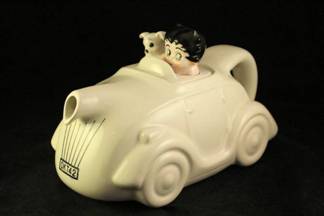 These teapots have a registration OKT42 and in most cases an underglaze stamp © VANDOR 1978 with stick on labels MADE IN/JAPAN in a blue oval or red triangular mark. There are no strainers inside the teapots. Until recently I thought Vandor teapots were all white body colour.  Here is a green example so other colours may exist! 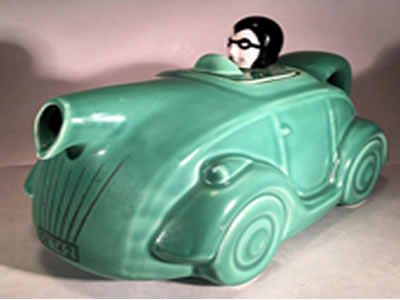 According to Sotheby’s auctioneers this teapot is a rare early design from which Sadler’s took their inspiration.  The teapot came up for auction on the 9th September 1977 as lot 78. 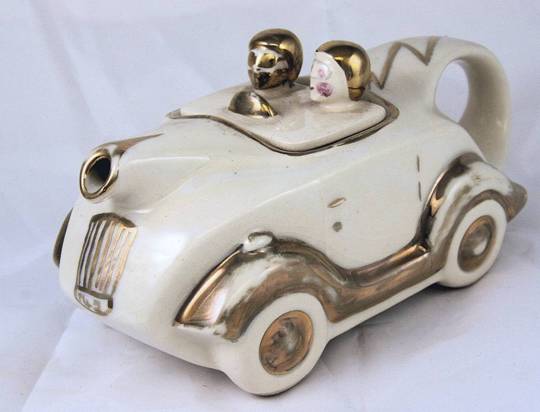 This pot is registered T42 both at front and rear and has a couple in the car.  It is slip cast and has a clear glaze decorated with gold lustre.  The woman has purple cheeks and eyes.  On the underside is a hand painted in gold Workhouse/Liverpool/England and the artist’s name L Roberts. 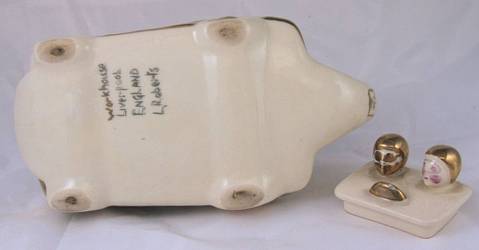 There is no strainer inside the pot.  The teapot has considerable age with associated glaze crazing also polishing rubbing of the gold lustre.  It has many features similar to the standard OKT42 teapots such as the distinctive sidelights and to my belief this is a copy of a Sadler not vice-versa dating probably pre-war.

Another recent find is a Workhouse teapot Reg T42/YEA with a dog driver. The slightly unusual thing is that the dog is looking sideways – not forward! This one has silver lustre And has the same inscription on the underside made by L Roberts. 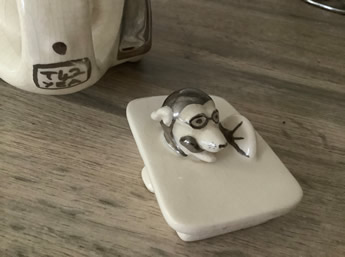 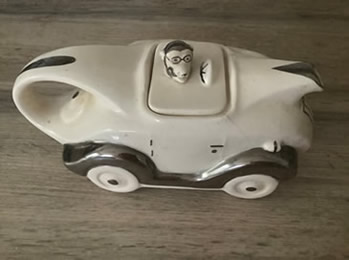 The OKT42 teaset was copied in Japanese Noritake Ware, certainly prior to 1980 and more likely before 1952.  This miniature teaset is of cheaper quality comprising of teapot, sugar pot with lid and milk jug.  These are accompanied by six cups and saucers plus six cake plates.  The image shows a part teaset alongside a standard OKT42 for size comparison.

The image on the cup/saucer and cake plate shows a car with two people aboard crashing into a road sign.  None of the teaset has any markings on the underside. 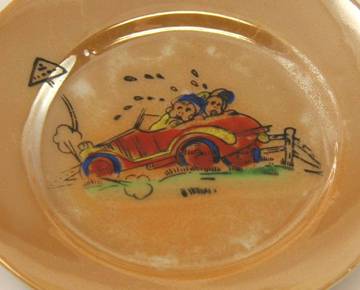 I have only seen one other similar teaset and this was glazed in a pearlescent white colour with green and red treatment of the wheel arches.  This white set was acquired by an American dealer from a UK auction.  The brown coloured set I have in my collection was acquired from New Zealand!

In the 1990’s we started to see in UK auctions and eBay some salt and pepper OKT42’s.  These were variously described as being copies or Sadler originals.

Again in the photograph the salt and peppers are shown alongside a standard Sadler OKT42 teapot.  They were available in a whole range of colourways with silver lustre and in most cases were sold in pairs of mixed colourways.  Although they were not made by Sadler they are of reasonable quality and part of the OKT42 story.  There are no markings on the underside of these pots except sometimes a decorator’s initial in lustre.

Since writing the above I have been contacted by Andy Titcomb the well known potter of teapots and ceramics also the author of Teapotsteapots (see references).   Andy advises that he made the salt and peppers in a whole variety of colourways also made some for Cosmic Zoom which have their logo underneath.  In addition he also made at the same time in the 1990’s, miniature teapots to the same size in a whole range of colours.  Some of the unusual colourways can be seen in the images below which are courtesy of Andy Titcomb. Thanks to Brian Swann, who has a large collection of these miniatures, I am able to illustrate the three underside markings.  These are, simply signed by Andy Titcomb, Cosmic Zoom and Made in England however many are not marked.