Home >> Other Teapots >> Use of Blank OKT42 Teapots

Later Use of Blank OKT42 Teapots

All teapots in this section have either the Registered Number or 1999 mark on underside.

Here begins the minefield of what was crafted on blanks left over from the Sadler Revival in 1999 and what has been produced from new moulds for sale to collectors.

Anything is possible – beware!

The best information is from the Stockport based Maxwells Auctioneers’ sales in November 2015 and March 2016 when they sold a large collection of novelty teapots including many different OKT42s.  Talking with the auctioneers they said the collection was built up by one local man (deceased) and much of the collection was still in wrapping as purchased.

The total number of OKT42’s was getting on for 70 teapots spread over the two sales and apart from one or two duplications all were different.  These included many different colourways and styles such as advertising that as a collector I had never seen.  It was suspected that these were possibly left over from small production runs and the market would see an influx of such teapots.  Over the year or so after the sale we have not seen any flow of unusual pots and the only different ones in the market such as eBay can be traced back to the sale.  All the pots (except a few with 1999 on underside) have the Sadler type Registered Number mark and are extremely well made.  The collection included the six Lorna Bailey art deco designed pots and the red and gold Teapot 2000 special issue pot.

It would appear that the accumulation was indeed one person’s collection – Paul Winstanley.   He was a train driver living in Bolton and was an avid novelty teapot collector.  Most of the teapots were bought from the Totally Teapots/Teapot collectors Club (Vince McDonald).  Many were produced as one-offs so the majority of them are unique.

It is believed that Paul Gibbs the owner of Teapot World, a teapot museum in North Wales bought most of the 1999 blanks from the receiver in 2000.  He commissioned via Lorna’s father for Lorna (a pottery designer) to produce 6 designs from which 100 limited edition teapots would be made.  These are variously titled DECO 1, LOVE 1, USA 1 etc replacing the OKT42 front number plate. (No rear plate) 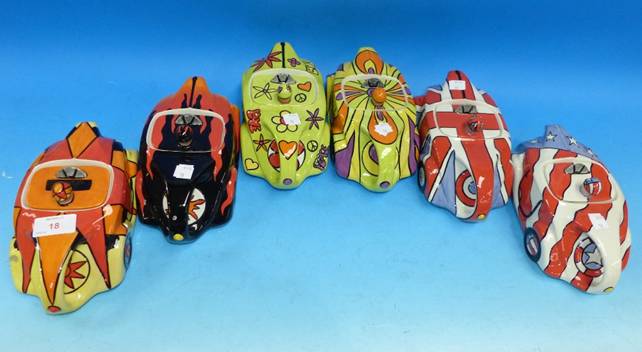 All the pots are signed Lorna Bailey on the underside and have a circular pottery mark – Old Ellgreave Pottery/ Artware/ Burslem England together with the painters initials.  There is also painted numbers 77/100 identifying the teapot from the limited edition. They do not have the Sadler Registered Design indented mark but have the small upstanding 1999.  These teapots do not have a strainer similar to the 1999 Sadler Revival teapots.
It is understood that during the production that there was a dispute between Lorna Bailey’s father and Paul Gibbs which resulted in about 200 teapots being retained by the Bailey family.  It is believed that most of them were sold as one-offs.

I was extremely surprised to find a Carlton teapot made from a 1999 mould (small figures).  It would seem that possibly Carlton (as well as others) purchased either some blanks or moulds on the demise of Sadlers in 2000.

The example shown has a black handstamp alongside the raised 1999 moulding. This teapot is unusual in that the mauve glaze has been sprayed onto the pot and not dipped into the liquid as usual.  Similar to other teapots cast from the small 1999 mould it does not have a strainer.  It would seem that this teapot is probably an attempt to create something different using a reproduction Carlton stamp and is not from the Carlton pottery. (a forgery?) 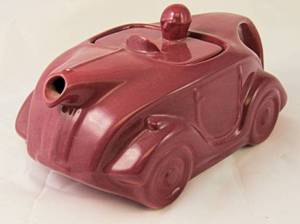 The example shown has a black handstamp alongside the raised 1999 moulding. This teapot is unusual in that the mauve glaze has been sprayed onto the pot and not dipped into the liquid as usual.  Similar to other teapots cast from the small 1999 mould it does not have a strainer.

In 2000 there was a gathering of teapot collectors where a limited edition (100 examples) of a red teapot was available for purchase.
This was red with black wheels and full silver lustre.  It was stamped on the underside RED RACING CAR TEAPOT/ PRODUCED EXCLUSIVELY/ FOR/ TEAPOT 2000/ AT/ The Potteries Antique Centre/ Ltd/ LIMITED EDITION OF 100 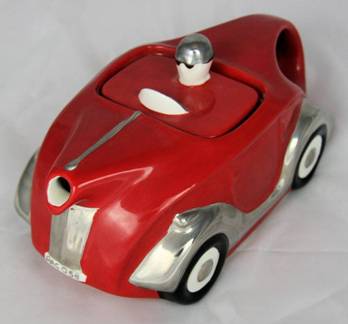 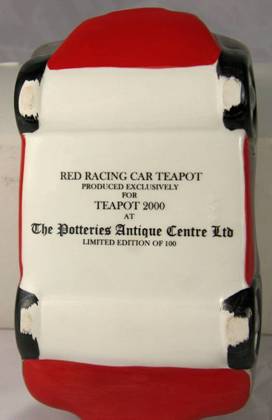 Similar to the Lorna Bailey teapots, the teapots do not have the Sadler Registered Number mark but have a small upstanding 1999 and 15mm long.  It is interesting that the red glaze was applied with a brush and thickly painted. These Teapot 2000 pots do not have a strainer.
The registration is PAC (Potteries Antique Centre) and the example I have is 058.   I assume that each pot is individually numbered showing the number in the edition of 100.

In the example I have the registration is PAC 058 not the expected OKT42.

Besides the red Teapot 2000 there is another scarlet teapot made from a 1999 mould with raised numbers. This has only been seen with gold lustre but silver may well exist.  The mould numbers on this teapot are larger than normal. It would seem that the teapots with the small 1999 marks are from the receiver sale of the remaining blanks (or subsequent recasting).  These pots with the large 1999 are probably output from Totally Teapots. 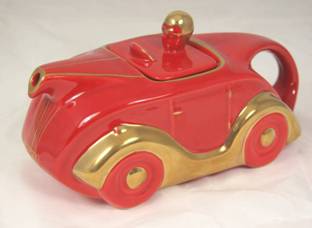 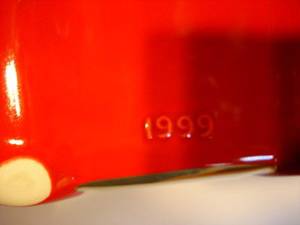 The raised numbers measure 2.3 cm in length (across the 1999) compared the smaller 1.5 cm of the Teapot 2000.  The teapot does not have a strainer but does have colour inside the teapot.

There have been several new colourways introduced post 2000 on pots from both the 1999 and Registered Number moulds as well as continuity of some of the previous scarcer colours such as dark green, teal, dark blue and black.  Any combination is possible so collectors should not be surprised by new colours appearing on old or re-manufactured moulds.
It is believed that most of the post 2000 teapots on registered Number moulds were on remanufactured by Totally Teapots but it could be that some are Racing Teapots without the backstamp.

This is a well made teapot very similar to the original Sadler’s from a Registered Number mould with impressed mark on the base. 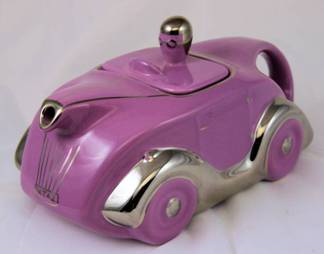 It is silver lustred, has colour inside the teapot and the standard 5 hole strainer.

This colourway has only been seen with gold lustre, silver could well exist. 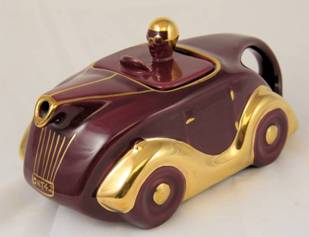 This has the Registered Design impressed mark on the base, colour inside the teapot and the standard 5 hole strainer.

This teapot has been dipped in white glaze differing from the earlier Ivory OKT42’s.  The ivory teapots had a clear glaze on white clay. 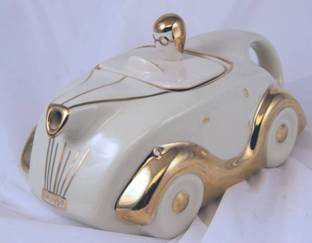 The example shown has gold lustre but is also known with silver.  This has the standard 5 hole strainer and the impressed Registered Number mark.

The teapots have also been made with colour mudguards instead of the full lustre usual type.

Examples shown with black, purple, green and claret, other colours exist.  It can be seen that the lustre coach lining is either silver or gold and the car registrations are either OKT42 or OK1937.  The teapots have the standard 5 hole strainer and Registered Number indent mark on the underside.  It is believed these coloured mudguard teapots are from remanufactured moulds by Totally Teapots originally part of the Winstanley collection.  Most will be unique.

These teapots had a transfer decal of the MG Cars logo at the front and rear plus extra striping in silver or gold lustre on the bonnet and boot of the car.  There are side numbers 2,4,10 and these are reflected in the registration MG4 etc.  The wings of the cars are painted red, green or black.  These teapots have the standard 5 hole strainer and Registered Number mark on underside. It is believed these MG Car teapots are from remanufactured moulds by Totally Teapots originally part of the Winstanley collection.  Most will be unique.

Besides the transfer decals of the MG car several were used in combination on some OKT42’s. 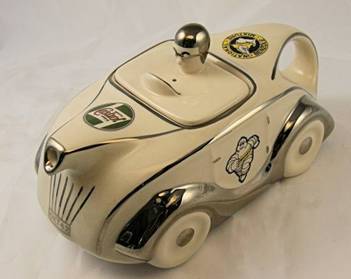 It would seem that decals were used advertising:-

The teapot illustrated has the registration OKT42 but other similar transfer teapots have been seen with OKT1937.  These pots have the standard 5 hole strainer and Registered Number indent on the underside. It is believed these MG Car teapots are from remanufactured moulds by Totally Teapots originally part of the Winstanley collection.  In view of the random nature of selecting transfers it is likely that all these advertising transfer teapots are unique.

It is understood that an extremely limited number of completely lustred silver and gold lustred OKT42’s were available at Teapot 2000. It is more than likely that these are unique examples. 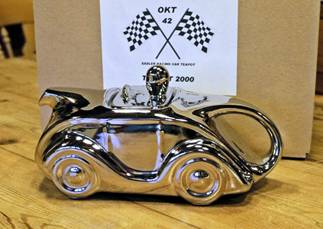 These were made from the remanufactured Registered Number mould with the impressed mark on underside.  They have the standard five hole strainer but they have no lustre inside the teapot.  The head of the driver is relatively thin and tall compared to the norm. It is believed that these were made by Totally Teapots.

In the period after the bankruptcy blank moulds appeared in various auctions and eBay.  I had several in my collection so I decided to commission the famous motoring artist Dexter Brown to decorate a blank for me as an art form.  Dexter has painted full sized cars including Formula 1 but never tackled an OKT42 before. 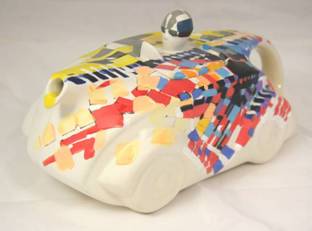 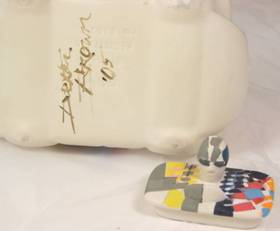 This teapot completed in 2005 is painted with Acrylic paint on a white sprayed base coat and has the indented Sadler Registered Number mark.

Copies/Forgeries by Casting from Original Teapot

There are several copies (by unknown manufacturers) made from castings off an original teapot.

These are easy to identify as the casting and firing process means that the copies are in theory around 10 – 15% smaller than the originals due to the clay shrinkage.  (Photograph of original and copy (to the right) of black lustre OKT42).  As they are cast from an original teapot they often have on the underside a weak impression of the Registered Number mark.  The copies I have in blue and black lustre do not have a strainer and no colour glaze inside the pot.