Peter Wood, then a motoring journalist purchased in circa 1993 the original wooden bucks for the OKT42 teapots from the grandson of a retired model maker.  The model maker had kept the bucks when he had retired from working with Sadler in 1949.  It is assumed that this person was freelance as he worked for other Staffordshire potteries besides Sadlers.  In total there were 39 bucks for different teapots including the car, caravan, bus and aeroplane.  It is assumed that the model maker besides making the bucks supplied to Sadlers the plaster of Paris moulds from which the slip castings were made.
It is interesting that when Sadlers in 1996 were contemplating re-introducing the OKT42 teapot Peter Wood offered to sell the original bucks to them for little more than he paid.  Sadlers refused the offer and ended up making a cast from an original teapot in 1999.
Following requests to produce spare lids etc for the teapots Peter Wood started to make copy OKT42 teapots.  I am not sure when he started producing OKT42s but the company was incorporated in May 2001.  Various colourways were produced copying the originals but also new colours were introduced. 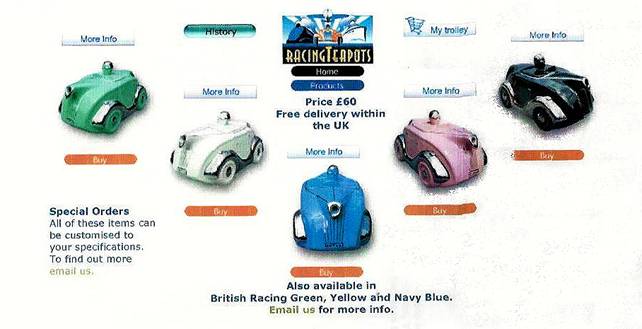 Above is a copy of one of his advertising flyers and it can be seen that the cost of a OKT42 at the time was £60.  Wherever possible he followed the same materials such as clay and glazes as the original production.  Being from the same buck his teapots have the same finished size as the originals.  They also have the Registered Number mark like the originals, albeit the dimensions are slightly different.  As the Racing Car teapots are such a good copy they were all stamped with a black maker’s mark as below.  It was intended that this mark would be impossible to remove so the teapots could not be passed off as originals. 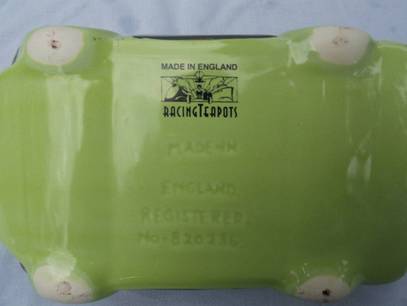 There were some special OKT42s made for other clients, for example, prototypes with brown colourway and gold lustre for Louis Vuitton to match their corporate colours also he offered to ’personalise’ teapots for clients.
Besides the OKT42s Racing Teapots also produced planes, tanks, airships, ocean liners and train teapots from the original moulds. 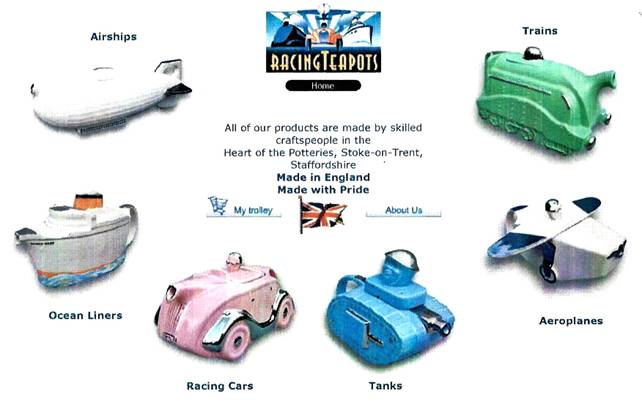 I am not sure when Racing Teapots ceased business but the last return to Companies House was in July 2004 and an application for them to be ‘struck-off’ was made in January 2006.
What happened to Peter Wood and his moulds is uncertain and I would love to hear from him.  However, the output from his moulds was used possibly for other teapots see copies and forgeries.