Associated with the OKT42 teapots are the caravan, bus and boat by the Beswick pottery.  Because they use the same pre-war green, yellow, ivory primary colourways as the early teapots they are often listed as Sadler output.  In addition the caravan has a registration JAM 42 and the bus is T44 which further associates them with the Sadler teapots.  All these items are scarce and a true comparison of rarity between different colours is difficult.

The bus is listed in the Charlton Standard catalogue of Beswick Pottery as being designed by a Mr Watkin and was available 1938 to 1954.  The examples seen have the shape pattern number 576 and MADE IN ENGLAND stamped on the underside below the glaze.  There is no manufacturer’s mark.  However, some have the decorator’s identification number in black glaze painted on the underside.  Since the initial launch of this website an ivory colourway has come on the market for sale by Eclectables – see References. The ivory colourway has lustre trim. 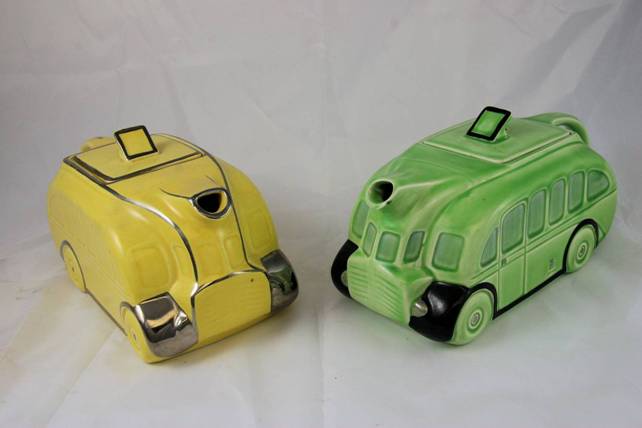 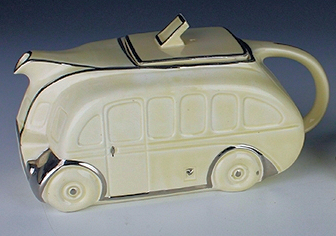 The bus has mudguards, coachlines, ventilator and registration T44 (rear only) in silver lustre or black.  It is suspected that the silver examples are pre-war whilst the black was applied in the post-war austerity.  It can be seen that the lustre examples have more coach lining than the black ones, for example around the lid and radiator. 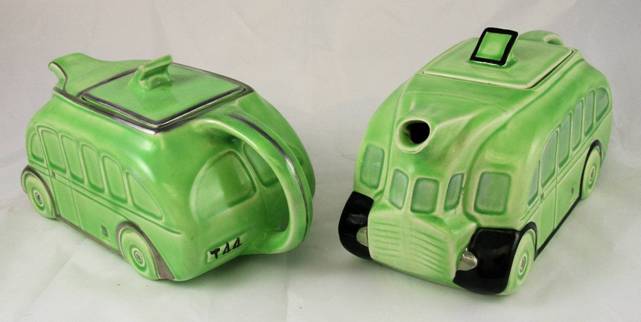 The caravans are the easiest to find of this group and are often ‘towed’ behind OKT42 teapots albeit there is a scale difference.  The standard Charlton catalogue says that caravans were designed by Mr Watkin and were available 1938 – 1954.  All three colourways green, yellow and ivory have been seen.

Yellow and green are equally scarce, ivory is even scarcer.  Shape number 577 and MADE IN ENGLAND is stamped on the underside beneath the glaze.  The coachline swirls, roof outline and ventilator can be found in silver lustre or black glaze however the registration JAM42 seemingly is always in black.

Similarly the small tow bars at both ends of the caravan are always silver even where all the rest of the decoration is in black.

Until recently it was assumed that the nippy boat consisted of two parts - the body and the lid.  Examples have now been found of a third part a insert tray for the rear of the boat. 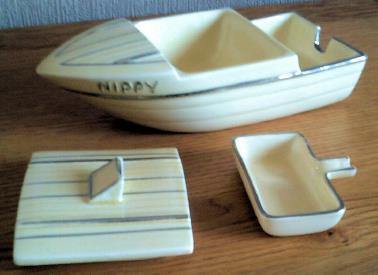 Whether there are two versions (a two or three part) is not known.  Possibly all were three part and the little rear tray has been lost in the course of time.  Initially it was assumed the boat was an ashtray/cigarette dispenser with the cigarettes stored under the lid.  However, the Charlton Beswick catalogue lists this as a preserve dish, designed by Mr Watkin in 1938 and was available 1938 – 1954.

It had been believed that all the examples had silver lustre. It could be assumed that the black paint lines may have been used post war like the caravans. However surprisingly a 3 part pale blue mottled boat has now been recorded without any lustre. This indicates that production continued after the war as the introduction of mottling on the teapots was around 1947. There is no registration mark on these boats, all they have is the name NIPPY on the bow. It is unusual to see anything on the underside but one example had a stamped shape code 590. Occasionaly there is a painted decorator’s mark. 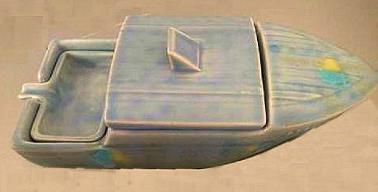