It is believed that the end of production was 1952 when all efforts were transferred to producing Coronation mugs and similar ceramic souvenirs.
After the end of the war many new colourways were introduced plus later reuse of old blanks has created a very confusing situation.  Hence it is difficult to be definitive.

So what new colours were introduced by Sadler?

It would seem that the above were issued with full lustre not coachlined neither have I seen any plain teapots (without lustre).

All the mottled teapots.

These are in addition to the Pre-War colourways

We know that several of the Pre-War colourways continued to be produced, as very occasionally you see one of the above with a Sadler/banner black handstamp on the underside.  The colour on the later issues is far less dense that the early ‘solid’ colour.  The lustre is also lighter and more mirror like that the early platinum silver.

The three teapots shown are the slate blue (Light sky blue), duck-egg blue and teal blue which is a combination of dark blue and green.   It would seem that a shipment of duck-egg blue teapots went to North America as several have appeared on eBay from Canada.  So they are now more common than they used to be!

As mentioned elsewhere the shade range within a colourway can vary considerably so for comparison I have included a light and dark pink ‘standard’ colourway for comparison.  The teapot at the left is the scarce Puce colour and the one at the right is the deep red claret colourway.

The post-war dark green Sadler is the one on the left and for comparison alongside is the gold lustre Sadler Revival limited edition teapot of 1999.  To the right of the Revival teapot is the post-war Teal colourway and finally at the right the standard green colourway. 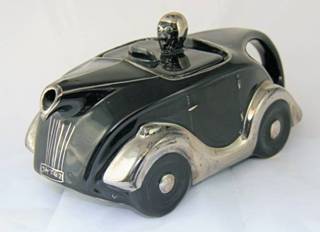 Very collectible teapot which means that several copies/forgeries exist.  It is similar to the duck-egg blue colourway in that a consignment must have gone to North America.  What was once a very scarce colourway is now easier to find with eBay worldwide.

A recent discovery has been a new yellow colour of OKT42. The standard chrome yellow colour comes in various intensities from the earlier deep yellow glazes to the later thinner almost watery yellow. However, all are a similar shade. It would seem that post 1947 the constituents of the glaze was changed and a new yellow has been seen. This is a dull flat custard yellow. A couple of examples have been seen and both have the ribbon SADLER / MADE IN ENGLAND black backstamp signifying post 1947 production. 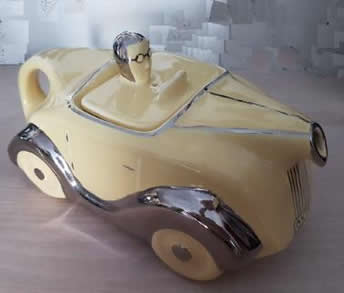 I remember seeing in the 1980’s a grey lustre colourway teapot in a small collection of OKT42’s in Christie’s Auctions.  Unfortunately I did not keep a record of the sale.

In John Zolomij’s book The Motor Car in Art (see references) there is a colour photograph of a brown full lustre OKT42.   This teapot was part of the Raymond Holland collection in the USA and I have no reason to doubt that it is genuine.

I do not think Sadlers produced any white OKT42 teapots in period.  The standard colourway was ivory formed from the white creamy clay fired and covered with a clear or slightly honeyed glaze.  All the white glazed pots I have seen are post 2000 after Sadlers went out of business, although they may have been made out of old blanks or moulds.