In 1999 James Sadler & Sons Limited in an effort to boost their flagging fortunes issued two limited edition OKT 42 teapots.  This was insufficient to help the downward spiral and the company went into receivership on the 6th March 2000.  It is understood that no Sadler OKT 42 teapots were made in the period 1953 to 1999.
Two different teapots were made initially a dark green colourway with full gold lustre in an edition of 100 this was priced at £175 and sold rapidly.  Based on the dark green success a limited edition of 1000 of an electric blue teapot was planned selling at £100.

Both were attractively packaged in special silver boxes with tipped on title.  Inside the box was a two page brochure about the teapot which was wrapped in a chequered flag cloth for protection.  The pots do not have an internal strainer unlike the earlier Sadler OKT42 teapots. 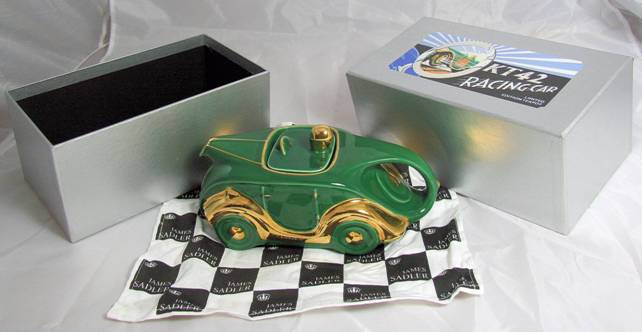 The brochure is particularly interesting as it says on page 2 that the teapot was designed by Cyril Lancaster in 1935.  This is earlier than the common belief that 1937 was the start date.  Since this is an official factory document we will have to accept 1935.

It says on Page 2 that the original moulds have been used.  This is incorrect as the original wooden prototypes (bucks) were in the possession of Peter Wood of Racing Teapots Ltd. Hence, without the original buck Saddler’s were unable to manufacture the Plaster of Paris moulds. It is believed that they used an original yellow OKT42 as the buck.  Due to clay shrinkage etc this means the revival teapots are smaller than the original OKT42s.  They designated their new mould with a 1999 date mark on the underside.  It does not have the Registered Number impressed mark. 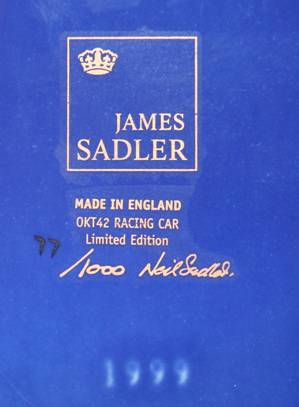 Above is the underside of Limited Edition number 77 of 1000 of the electric blue teapot.  It has the gold transfer mark giving details also signed by Neil Sadler.  The small 1999 upstand mark can be seen at the foot of the image.
The green edition of 100 had more or less sold out but only about 100 of the blue teapots had been finished before the factory was put in the hands of the receivers.  About 650 biscuit ware blanks (fired once but no glaze) were sold off to help offset the factory’s debts.
Around 100 blanks were bought by the Teapot Collectors Club and most were used for a limited edition scarlet teapot with silver lustre and black tyres.  These were sold at the Teapot 2000 gathering.
The large majority were bought by Paul Gibbs of the Teapot World museum in Conway, North Wales.  He contracted potter Lorna Bailey to decorate the teapots in six attractive designs in limited editions (of 100).
See later use of blanks and copies for fuller details what happened to these blanks.