Associated with the OKT42 teapots are the Sadler aeroplanes and tanks.  It would seem that the aeroplanes are considerably scarcer than the tanks and probably only available pre-war whereas the tank had a longer run as confirmed by the availability of a greater number of colourways including some of the post-war unusual colours of the OKT42 teapots. 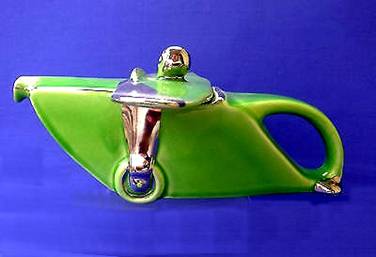 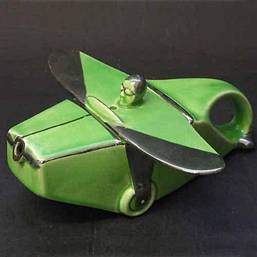 There are two principal model types, the long and short spout varieties.  It is suspected that the earlier version is the short nose which must have been a poor pourer and to counter this problem the longer spout was introduced.  Both types have the silver lustre applied to undercarriage, wings, tailplane and body lines.  They have stamped on the underside beneath the glaze T PLANE/ MADE IN/ENGLAND. 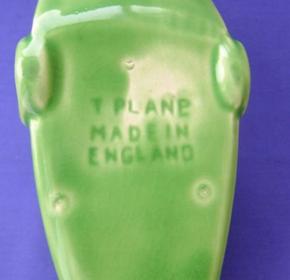 In some cases there is a decorator’s mark/initials in silver lustre.  There is no manufacturer’s mark.  The strainer inside the pot is curved and has four round holes.The wings are extremely prone to damage as they are easy to catch or fall off during pouring.  To my knowledge it is impossible to perfectly restore the lustre on a broken wing.  The reproduction silver does not have the same gloss lustre as the original high temperature fired metal based glaze.  There are more aeroplanes with damaged wings in existence than complete examples; however, due to the scarcity of the T PLANE they are still very collectable. 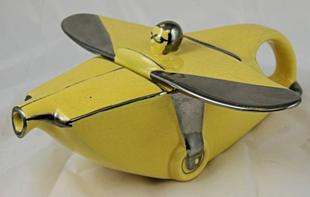 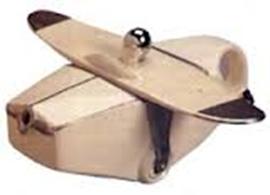 The T PLANE has been seen in the three early colourways of green, cream and yellow and in both spout combinations.  On balance it would seem that the short spout is the more common and green the commonest colour, followed by yellow then ivory being the scarcest.  In my valuation I have not differentiated between colourways or spout length, all are very scarce!  (Interesting to note the different wing lustre layouts of the yellow and ivory teapots above).

In his book British Art Deco Ceramics (See References) Colin Mawston says that the aeroplane teapot was produced for Sadlers by Sudlow’s of Burslem due to over demand for the OKT42 teapots.

The T Plane in a similar (but different shape) was reproduced by Racing Car Teapots Ltd (2001 – 2009) and has the longer spout plus it is stamped on the underside with the maker’s name.

The tank teapot was produced in far greater numbers than the T-Plane and probably over a longer date range.  It would seem to have been produced pre-war in the ivory, green and yellow primary colours via mottled colours all the way through to the later colourways such as pale blue and claret.  The teapots were available both with lustre and plain.  Some of the coloured teapots had a painted face on the driver.  In addition to all these varieties copies were made by Racing Teapots Ltd – See Racing Teapots. 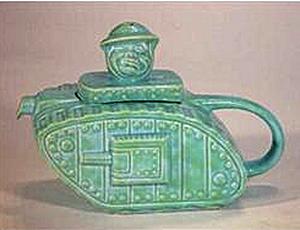 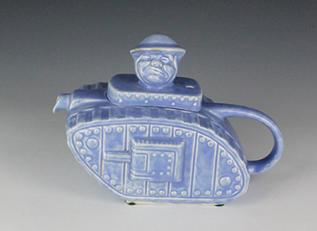 The markings on the underside are interesting in that the earlier ones have MADE IN ENGLAND indented into the base from the mould but also rarely seen is a circular MADE IN ENGLAND black stamp. 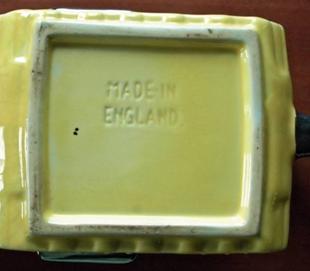 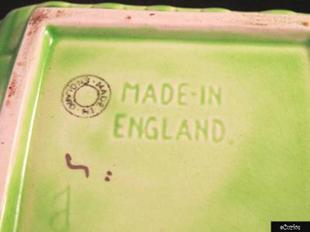 This black circular mark has not been seen on the OKT42 teapots and it gives ground to the thought that the earlier pots were outsourced. 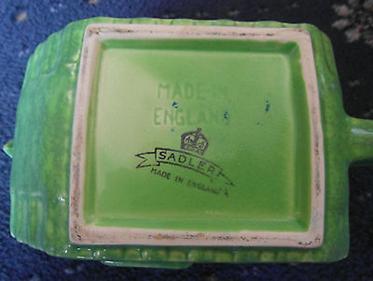 However some of the later tank teapots have the large Sadler banner mark on the underside.

Who is the driver of the tank, some have said Churchill?  No, I am sure it is Old Bill the First War cartoon character of Bruce Bairnsfather.  Bairnsfather’s art was extremely popular during the war/inter-war years and many cartoon images were produced which were used on plates, mugs and car mascots.
The valuation of these tank teapots is difficult for me as I have not collected them and so much is dependent on the scarcer colourways.