It is believed that the racing car teapot designed by Cyril Lancaster commenced in 1935 (See Sadler Revival). Other sources say the earliest date is 1937.
It could be that they were designed in 1935 but major production did not get underway until 1937. The early art deco pots were cold painted over the original clear glaze and combination colours green/orange/black/grey or red/black/white were used sometimes with silver lustre highlights.   Here are three early teapots with variations of colouring and lustre.

A silver lustre radiator, hub caps, sidelights and registration was used on the examples illustrated.  It can be seen that the example in the middle has a registration OK1937 instead of the usual OKT42. 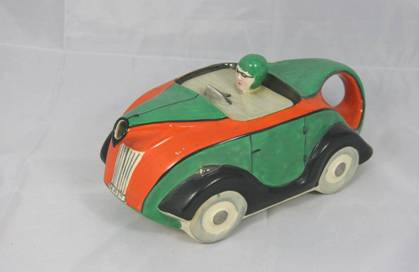 This 1937 example is unusual in that the driver’s face is also painted underneath the clear glaze, similar to some of the Sadler Tank teapots.  It has been said that the 1937 teapot was a special issue for the Coronation of King George VIth.See later use of blanks and copies with OK1937 registration.

The cold painting of these early pots is very prone to chipping.  On the underside of all three pots the only markings are the indented standard Sadler Registered Number teapot identification.  (This is transferred from an upstand on the mould). 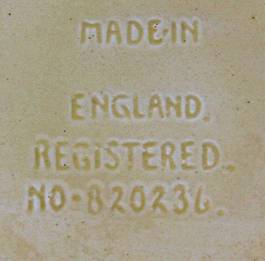 These early cold painted pots are extremely scarce and in forty years of collecting I am aware of less than 7 examples.  These pots have strainers which are somtimes different to the 5 hole standard colourway teapots.  In order to lessen the risk of copies of these cold painted teapots I will keep this information to myself.

Even more scarce are the red and black (no lustre) sets of cold painted teapot, milk and sugar pots.  I have only seen two sets (and a solo teapot).  One set is illustrated (Black and white photograph) on page 178 of John Zolomij’s book THE MOTOR CAR IN ART and the other set is in my collection. 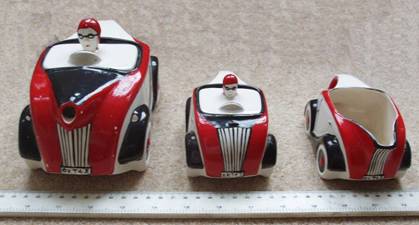 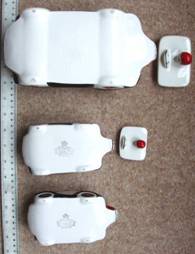 It can be seen that both sets have painted driver’s faces, but there are differences in the painting of the car bonnet.  Interestingly the teapot has the standard Registered Number impressed mark on the base.  The milk jug and sugar basin do not have this mark but have a Sadler banner mark on the underside.

There has been a new discovery which would seem to pre date all I had previously written about the green, orange & black early teapots. This is a black cold painted on green glaze teapot with silver lustre. The six radiator bars have been sgraffitoed through the black paint. The registration BRA 58 is the same at front and rear.

The other unique feature is the sgraffito work on the lustre running boards to give the appearance of step irons.

This black cold painted teapot could easily be dismissed as somebody altering an early green glazed lustre pot. However the proof of it being a very early pot is on the underside. The teapot has the normal indented mark MADE IN / ENGLAND but not the associated indented REGISTERED / No. 820236. The Registered Number has been painted on with black paint! This registration 820236 was allocated in 1937. So it would appear that this teapot was made from one of the first moulds before new moulds with the indented Registered Number could be delivered. A truly remarkable forerunner!